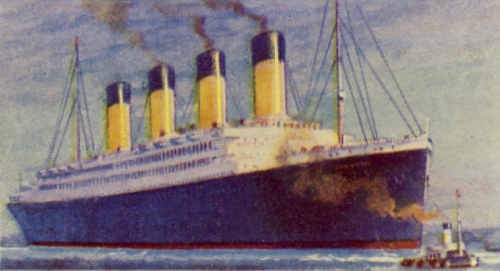 I’ve escaped from the norm with my latest Titanic public domain DVD – rather than book illustrations I’ve been immersed in photos, postcards, cigarette cards and a great deal of history to put together this Titanic collection.

This is a Titanic cigarette card (reduced size to that on the DVD).  I had to buy the whole set of 48 from Ebay to get this card! Both the front and back of the card are included on the DVD and there is also another Titanic card as well as one of its sister ship Olympic and of the Lusitania.

The Titanic story has been very much romanticised today, perhaps a great deal due to the most recent Leonardo diCaprio and Kate Winslet film, but also because the grandeur and opulence of the First Class areas of the steamer sit in stark contrast to the horror of the events of that night.

That hasn’t been lost on me when putting together this collection, indeed my thoughts have been very sombre when the terrifying events have unfolded through the sorting of photos and when I have inevitably got lost in reading exactly what happened on the night of 14/15th April 1912.

I won’t recount it all here as you can easily Google that one, but I have read some interesting things in my research that you may not know.

Titanic – sounds pretty big doesn’t it? Not so, it was ridiculously small compared with modern cruise ships.  I just found this photo on the internet to demonstrate this (it’s not included on the DVD).

The Costa Concordia, which sank in 2012 (100 years after the Titanic!), was more than twice the gross tonnage of the Titanic.

It is also clear from what I have read that not all images that claim to be the Titanic actually are!  Its sister ship the RMS Olympic was practically identical so pictures were taken of it after the the disaster which were purported to be the Titanic.

The Olympic had its maiden voyage before the Titanic in 1911 and then went on to have a relatively long and illustrious career, finally being taken out of service in 1935.  It was therefore easy to take pictures of the Olympic and ‘pretend’ that they’re of the Titanic, no doubt for financial gain.

I’ve read a very interesting discussion online that claims this is actually the Olympic and not the Titanic at all.  This one is on our DVD – I don’t know which ship it is, I’m no expert!

I’ve also read quite a lot about the ‘unsinkable’ Margaret Molly Brown who featured in the 1997 film, played by Kathy Bates.

A very interesting character and someone who was perhaps looked down on by other First Class passengers as she represented ‘new’ money…. or was that just in the film?!  She was certainly a people’s person, did a lot of charitable work and was not an upper class snob!

Anyway, I should probably stop rambling and talk about the DVD…. There are loads of black and white photos on it including Captain Smith of the Titanic (victim), Bruce Ismay who was managing director of the White Star Line (survived), Mr and Mrs Isador Straus (who owned Macy’s Dept store in New York (victims), Frederick Fleet (ship’s lookout and survivor) and loads more.

There are Titanic postcards in colour, more cigarette cards, ephemera & posters, a couple of poems, sheet music in colour written about the disaster, newspaper reports from the time, cartoons of the time and other little bits and pieces that are interesting, including this picture by Howard Chandler Christy from 1910.

Funny, I used this one in a cardmaking set on printableheaven.com a while back, giving the picture the title ‘Almost Titanic’.  It’s nearly there (if you use your imagination!) isn’t it!

Check out our Titanic Public Domain DVD for more images.